A rare opportunity to hear organist Gillian Weir reflect on her extraordinary career and discuss the finer points of organ-playing with the Festival’s Artistic Director David Hill.

Gillian Weir is perhaps the most honoured organist today and is especially regarded for her interpretations of Messiaen’s music. She has performed his complete works several times and her recording for Collins Classics was hailed as “one of the major recording triumphs of the century”. At Messiaen’s request, she gave the first UK performance in January 1973 of the Méditations sur le Mystère de la Sainte Trinité at the Royal Festival Hall from the composer’s manuscript, given to her after he gave the world premiere in Washington D.C. She was made a Dame Commander of the British Empire (DBE) in 1996.

David Hill, Artistic Director of the Cambridge Summer Music Festival, combines many roles including his recent election to the Presidency of the Royal College of Organists, Musical Director of The Bach Choir, Music Director of the Leeds Philharmonic Society, and Associate Conductor of the Bournemouth Symphony. 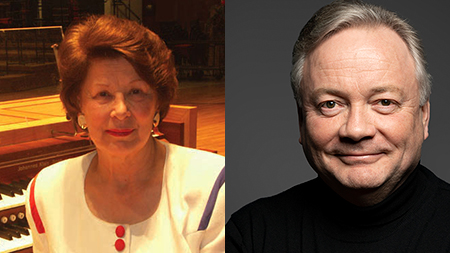