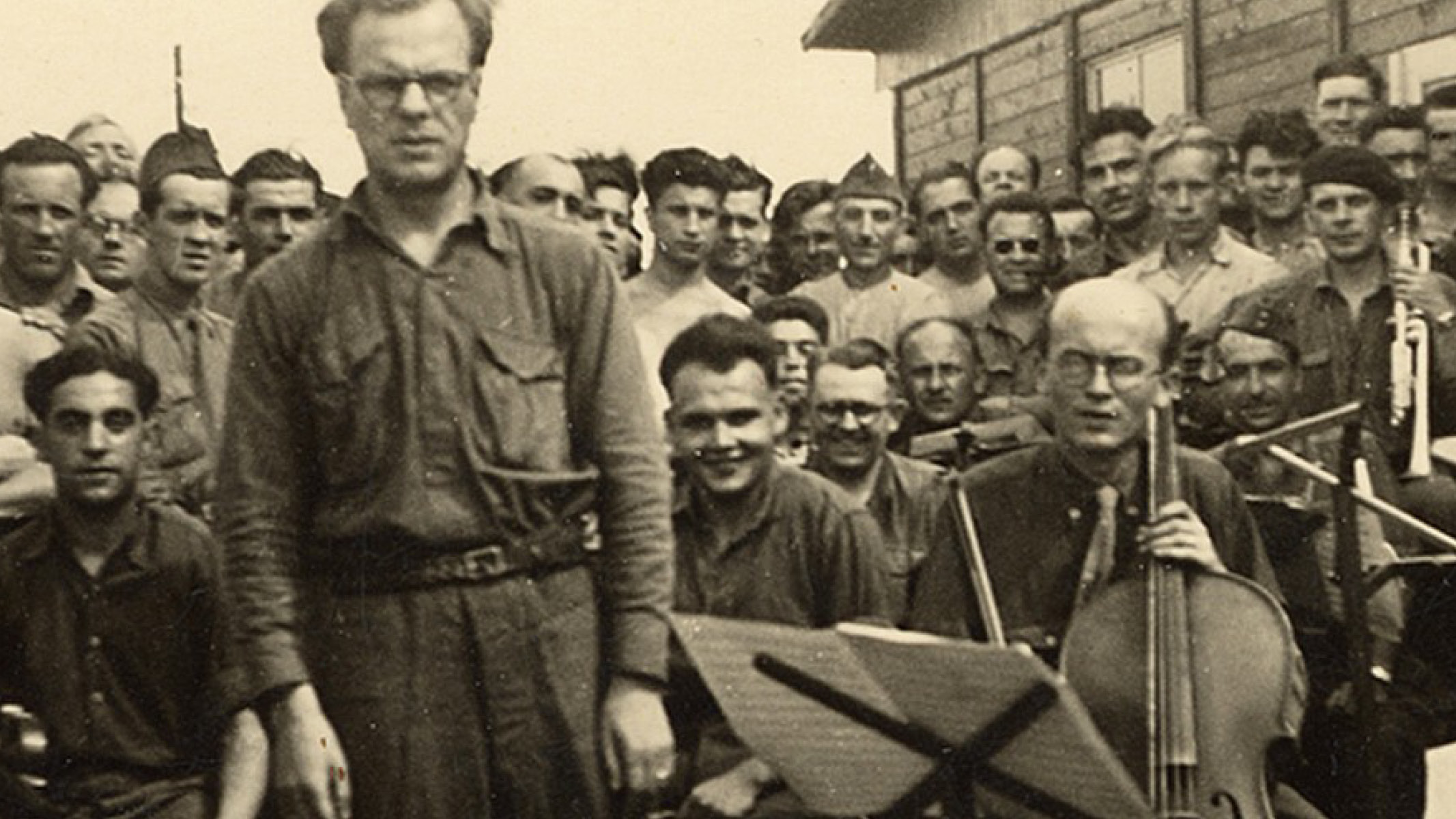 Messiaen Quartet for the End of Time

If ever there was a piece of chamber music that could be described as a masterpiece in its composer's lifetime, this is it. First performed by Messiaen and three fellow prisoners in a German prisoner of war camp in January 1941 to an audience of 5000, Quartet for the End of Time remains to this day one of the staples of the chamber music repertoire

Clarinettist Joseph Shiner regularly appears at venues and festivals around the United Kingdom and internationally, with recent engagements at Wigmore Hall, Kings Place, Bridgwater Hall, Snape Maltings, Holywell Music Room and Barbican Centre, as well as the Oxford Lieder and St Magnus International festivals. His awards include the Hattori Foundation Senior Award, the Philip and Dorothy Green Award (for Young Concert Artists), and the Worshipful Company of Musicians’ Prince’s Prize. A selected artist for Making Music and the City Music Foundation, he has also appeared several times on BBC Radio 3's 'In Tune' programme, as well as in BBC Music Magazine's 'Rising Star’ feature.
As a chamber musician Joseph has enjoyed collaborations with Maiastra, the Allegri and Endellion quartets, and with pianists Somi Kim, Keval Shah, James Baillieu, Christopher Glynn, Sholto Kynoch and Ashley Fripp. In 2019, Joseph released his first solo recording on Orchid Classics, surveying Brahms' works for clarinet with piano and 'cello with Somi Kim and Yoanna Prodanova. The disc was a Classic FM ‘Album of the Week’, and hailed by Gramophone for its 'stormy grandiloquence' and 'twilit poetry'.
Joseph studied at Wells Cathedral School with Kevin Murphy, Timothy Orpen and David Campbell, before reading Music at Gonville and Caius College, Cambridge University, graduating with double First Class honours. He then studied with Angela Malsbury, Mark van de Wiel and Chi-Yu Mo at the Royal Academy of Music, where he graduated with Distinction and the DipRAM.

Born in Wales, Ben Talton studied with Sharon McKinley and Alexander Baillie before attending the Yehudi Menuhin School to study with Thomas Carroll. He received a Scholarship to study at The Guildhall School of Music and Drama under Louise Hopkins, kindly supported by Help Musicians UK and The Countess of Munster Trust. He was awarded The Suggia Gift by Help Musicians UK, The David Goldman Award from The Worshipful Company of Musicians and was the recipient of the John Fussell and Raphael Sommer Awards. Ben is a Concordia Foundation Artist, a Park Lane Group Artist and a Yeomen of The Worshipful Company of Musicians.
Ben has performed in venues and Festivals such as Cadogan Hall, Wigmore Hall, St Martin-in-the-Fields, St John’s Smith Square, St James’s Piccadilly Church, West Road Concert Hall in Cambridge, Wales Millennium Centre, Cowbridge Music Festival, Casa da Musica in Porto, the Tonhalle in Zurich, the Muziekegebouw in Amsterdam and the Walt Disney Concert Hall in Los Angeles.
Ben is Artistic Director of the Llantwit Major Chamber Music Festival and is assistant teacher to Steffan Morris at The Royal Welsh College of Music and Drama. He regularly performs Chamber Music Concerts across Wales for Sinfonia Cymru.

Freya Goldmark begun playing the violin at age 4 after begging her parents for lessons. Now aged 23, Freya graduated from the Royal College of Music in 2018 where she studied as a Foundation Scholar with her long time professor Maciej Rakowski. Since making her concerto debut aged just 13 in Russia at the Rachmaninov Institute, she has enjoyed a busy career having performed as a soloist at many esteemed UK venues including Cadogan Hall, Elgar Room Albert Hall, Fishmongers Hall, Mansion House and the Purcell Room, Southbank.
By the age of 14 Freya had performed in Hong Kong, Penang, Kuala Lumpur, Bangkok, Russia, Norway and Germany. Freya works regularly with a number of English orchestras. 2021/2022 highlights include performances of Beethoven's Violin Concerto and a performance of Karl Goldmark’s violin concerto with Oxford Symphony Orchestra.
Having always loved chamber music, it continues to become increasingly important to Freya. As a chamber musician she has performed at Wigmore Hall and Elgar Room, Albert Hall as well as premiering and recording Britten’s early String Quartets at The Red House, Aldeburgh and performing at Sandringham House for HRH Prince Charles.
Freya is the director of Stamford International Music Festival which she founded 5 years ago and in 2019 joined CSM as Festival Director.